Koshik is an Asian elephant who can speak Korean. According to his keepers, the words he speaks can easily be understood by people who are fluent in Korean. The method which the elephant uses to produce the sound is quite strange: he sticks his trunk in his mouth in order to produce the necessary noises. 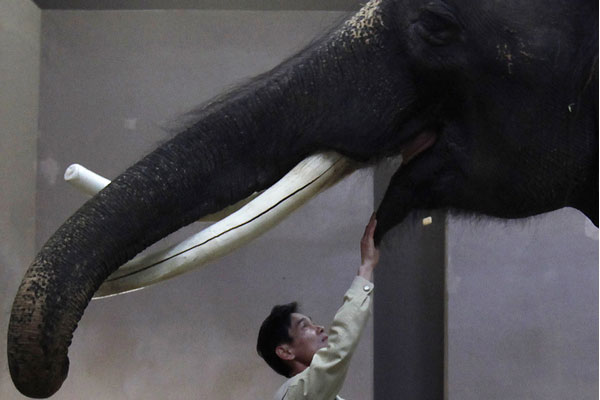 Currently, Koshik can imitate five Korean words: ‘annyong’ which means hello, ‘anja’ which means sit down, ‘aniya’ which means no, ‘nuo’ which means lie down and ‘choah’ which stands for good. The language skills which the elephant has developed may be used by biologists and scientists to find out more about vocal learning.

Angela Stoeger of the University of Vienna speaks about the elephant’s unusual ability: “Human speech is very complex to produce. Two of its most important factors are the pitch and timbre which are very difficult to produce by other creatures. Considering the large size, long vocal tract and the hundreds of anatomical differences between the average human and an elephant, Koshik’s achievement is admirable.”

It is also important to note that elephants don’t have lips, but Koshik replaces the lips with his trunk. Most elephants produce low-pitched sounds, but Koshik manages to copy the pitch, timbre and a range of other characteristics of the voices of his trainers. Koshik isn’t the first elephant to mimic vocals, because there have been previous reports of Asian and African elephants which imitate other sounds. The case of Koshik was researched by Tecumseh Fitch, Daniel Mietchen and Angela Stoeger. They tested the elephant’s ability by inviting Korean speakers to listen to the elephant’s recording and asking them to write down the words they hear. Most of the Korean speakers confirmed the words which the elephant supposedly speaks.

Scientists can’t confirm how Koshik adopted this unique ability, but researchers already have a theory. Koshik was very young when he was taken to the Everland Zoo and there weren’t any other elephants there. According to the researchers, the elephant spent years trying to resemble their voices and words in order to socialize with his trainers.