An Astronomical telescope is utilized for the observation of heavenly objects that are at great distance in relation to the earth. These include stars and planets. Due to the great distance, they appear very small in size and nearer to each other.

Astronomical telescope mainly consists of two lenses that are placed in a coaxial manner. Convex lenses are used for astronomical telescope. The lens that is located closer to the eye is called an eyepiece. The lens that is placed farther away is called an objective lens. The focal length of the eye piece is always smaller than the objective lens. 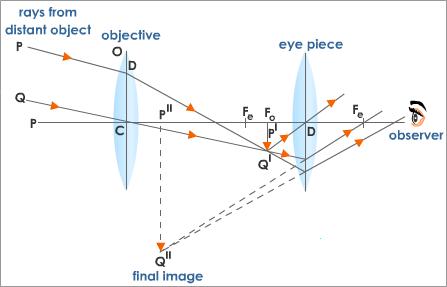 Once the telescope gets focused on a far away object, like a star, the parallel rays that comes from the star forms a small image, A1B1,that is real and inverted. It is the image that acts as an object for the eyepiece. The eyepiece can be moved back and forth to generate a virtual image of A1B1 called A2B2. This image is magnified. The final image version of A2B2 that is formed is up side down when compared to the object. Hence, the farther away objects are observed as a magnified image.